No, Autoblog has not ported you back via time machine into 1964. We’ve been tinkering with the technology for a while now, but don’t tell Riswick. He’ll just use it to go watch baseball or drive a Saab in 1985.

Today, on the internet, in 2020, we bring you a Luggage Test: Throwback Edition. You see, Volkswagen was kind enough to drop off a 1964 Volkswagen Karmann Ghia convertible at our doorstep for a day. Obviously, the first task at hand was to see how many bags fit in it. You know, because important consumer advice?

If you know anything about the Karmann Ghia, you already know there’s no storage in the trunk. That’s where the engine goes! Instead, come around to the frunk. Actually, first, you’ll need to pull the lever to open the frunk sitting under the steering wheel. 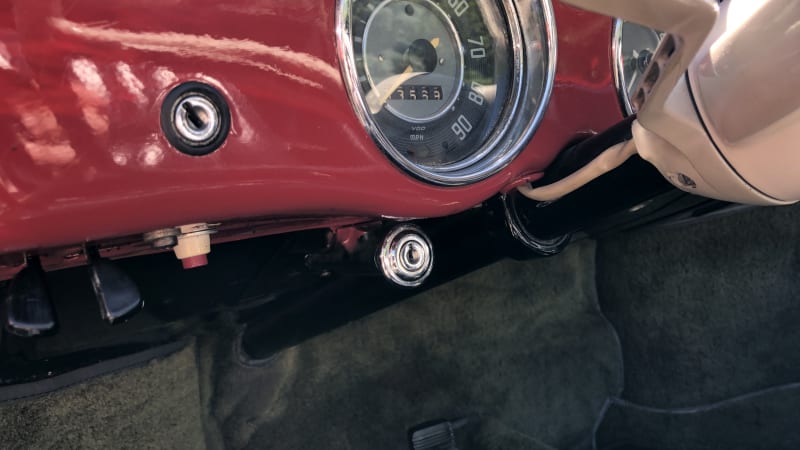 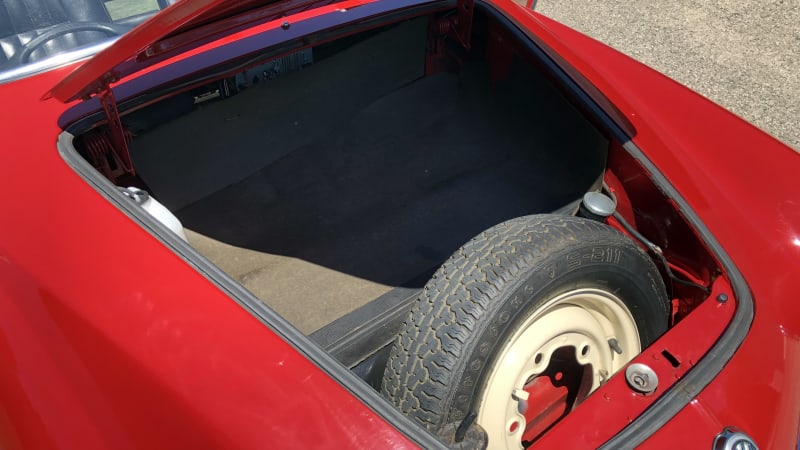 Voila! How spacious. Volkswagen even found room for the spare tire up here. You need the air pressure from the tire to run the windshield washer squirters after all. Seriously, that was a thing.

The 7-cubic-foot space itself is rather shallow, but not too shallow as to be useless. Also, in case you were wondering, that little silver cap you see to the right of the tire is where you put the gas. You know, exactly where everyone would (not) look for it. 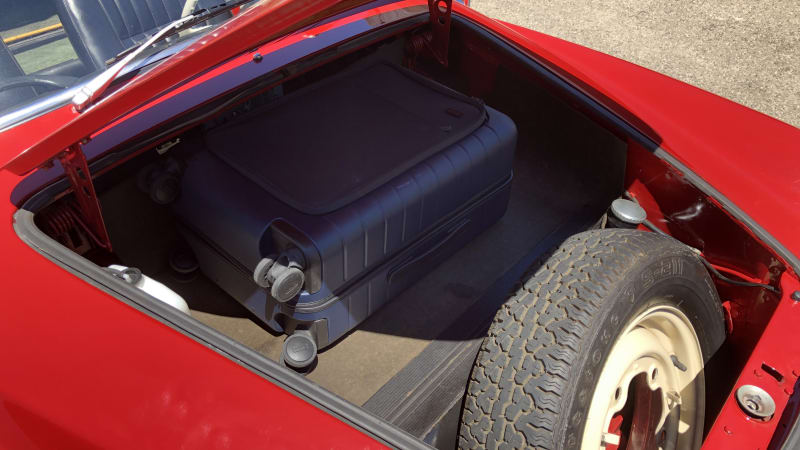 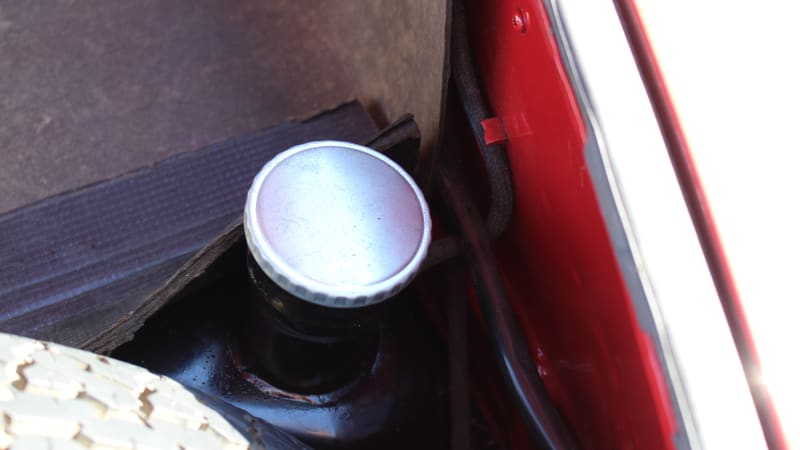 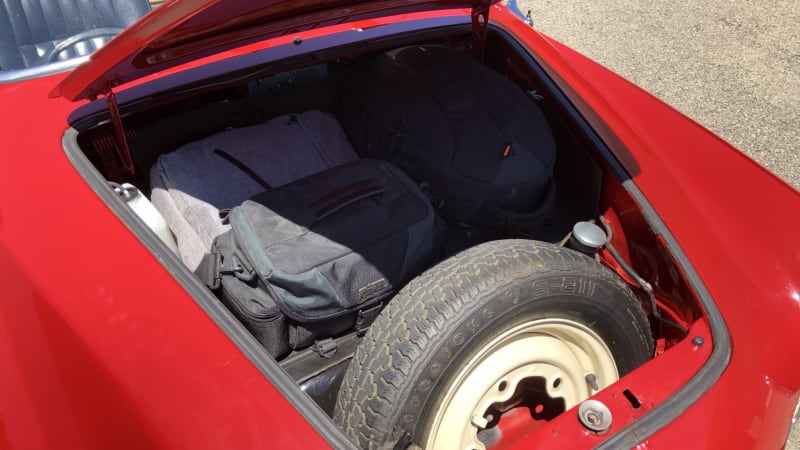 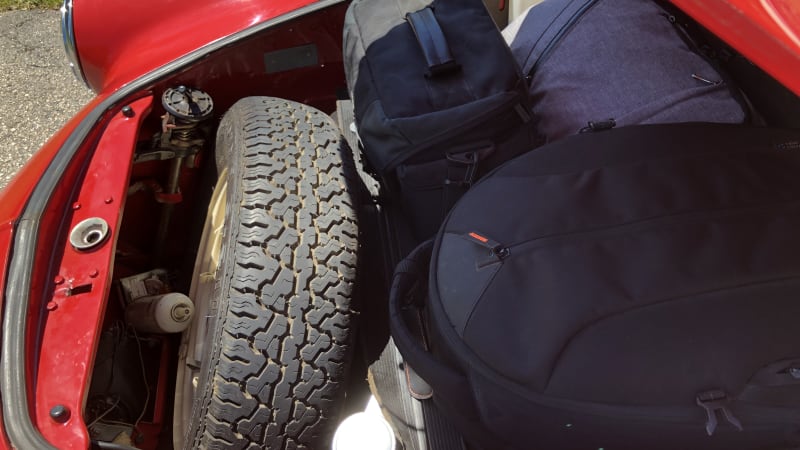 A grand total of one small carry-on suitcase can fit in the spot and still allow the hood to close. Some miscellaneous items could be placed around it, but there will be no more suitcases going in front. Instead of crying uncle, though, we decided it was time to modify the bags being used in the luggage test to pack more efficiently. For the front, backpacks are the way to go. We managed to squeeze in two sizable backpacks and a small camera case. And yes, some cameras from the time period would totally fit within the camera bag. Canon, our camera bag’s brand, was even around making cameras back then. With no space remaining, it was time to look for cargo space elsewhere. 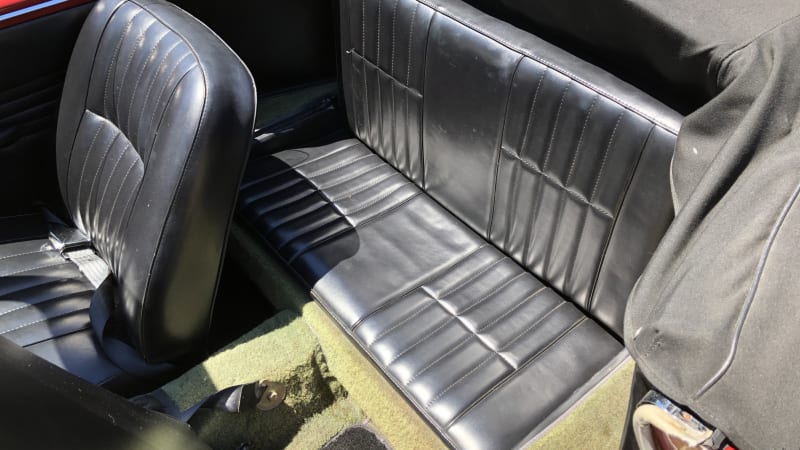 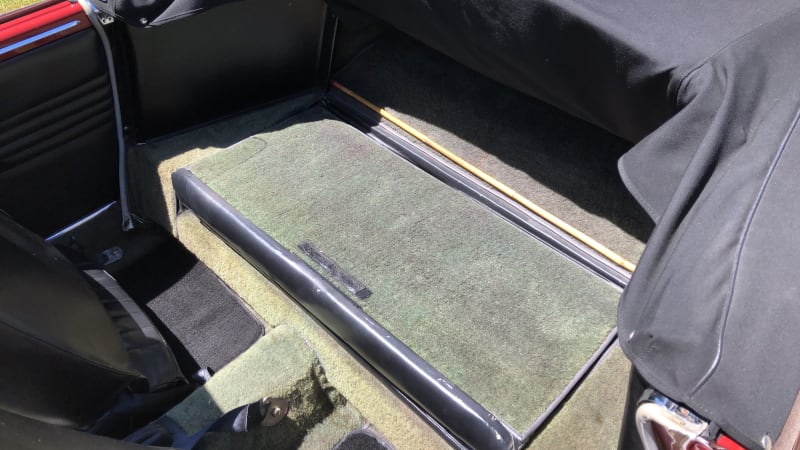 Technically, the Karmann Ghia convertible does have a backseat. It’s not useful for anyone larger than a child, but we’re not after legroom in this test. That being the case, we folded those seats flat to expose the weathered green carpeting. All of a sudden, the Ghia is starting to look promising. Folding both the rear bench and front seats down is a cinch. Simply push them, and they fall down. So convenient to not have to worry about any buttons, pull straps or headrests getting in the way, right? 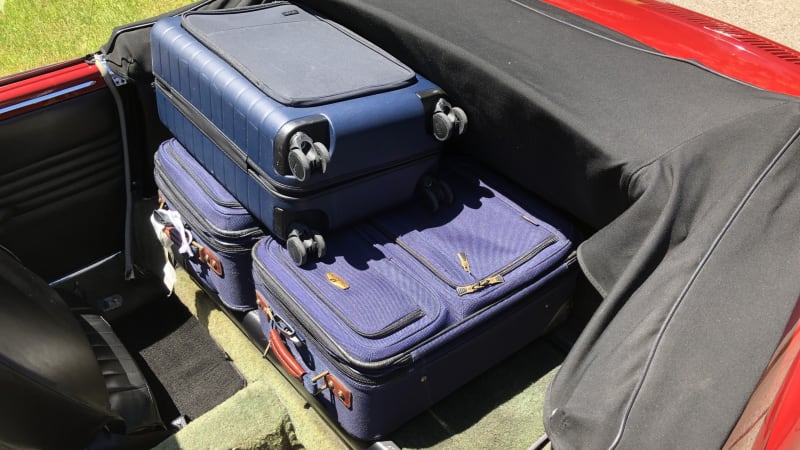 At any rate, time to break out the suitcases. Two small carry-ons fit next to each other on the floor, but that’s thanks to the Ghia’s well-designed floor that extends back under the convertible top. Only one carry-on suitcase fits on top of these two, because the convertible soft top gets in the way. Stacking two suitcases like the bottom two are stacked intrudes on headspace for the front passengers. On the surface, that’s no good. An enterprising individual may look at this issue, and think, free headrests! 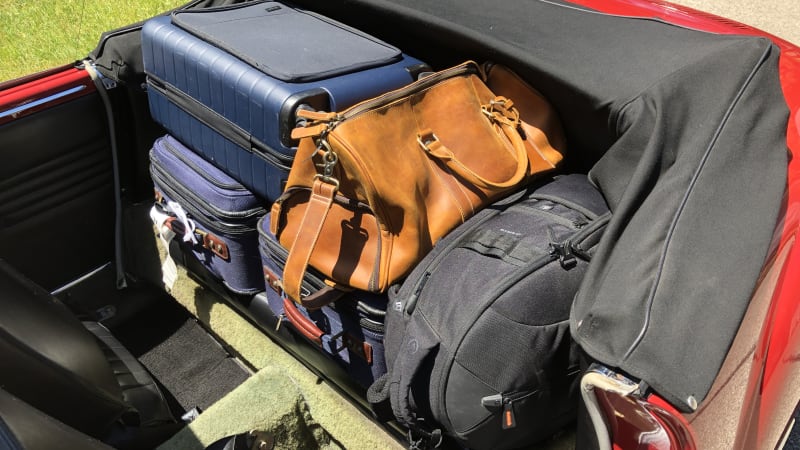 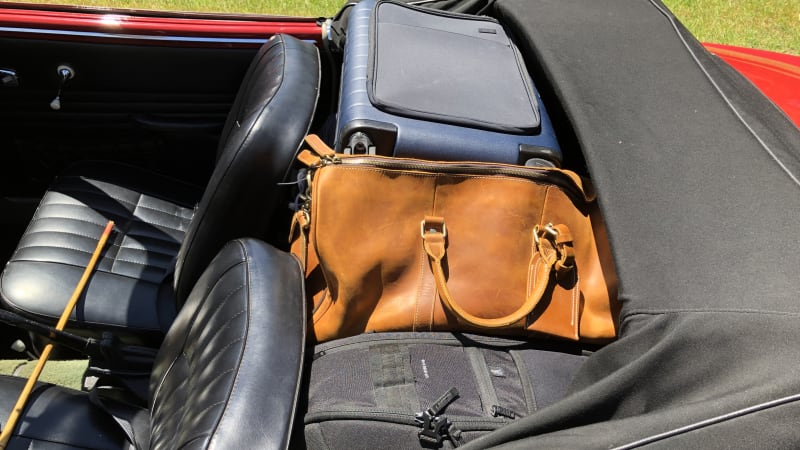 A couple more items could be squeezed in next to these three carry-on suitcases. The fancy bag fits on top, and the big backpack can be slotted in next to that. However, the backpack’s height makes putting much of anything else on top of it a losing proposition. Anything wedged in there has a decent chance of flying away if the wind were to hit it the right way. With the seats back in their upright position, the Karmann Ghia looks to be about as full as it could possibly be. By our estimates, that’s enough space for a couple people to have at least a 1-2 week long getaway. 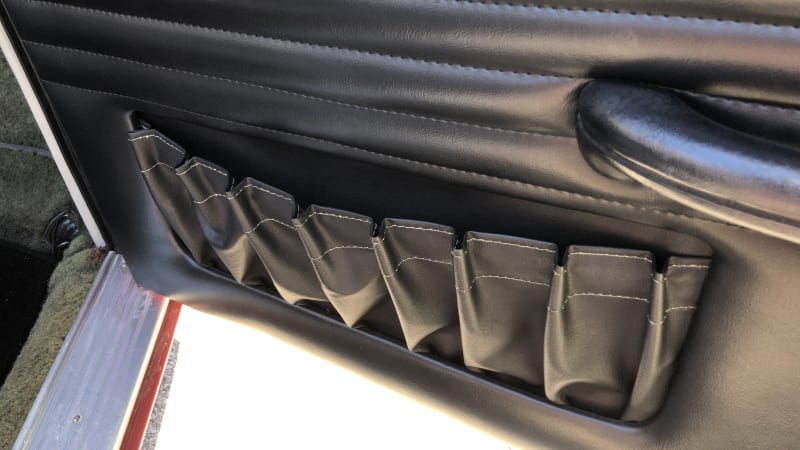 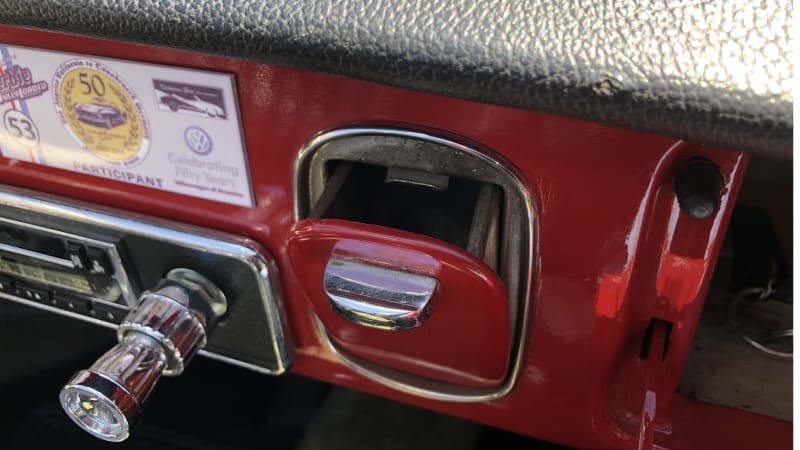 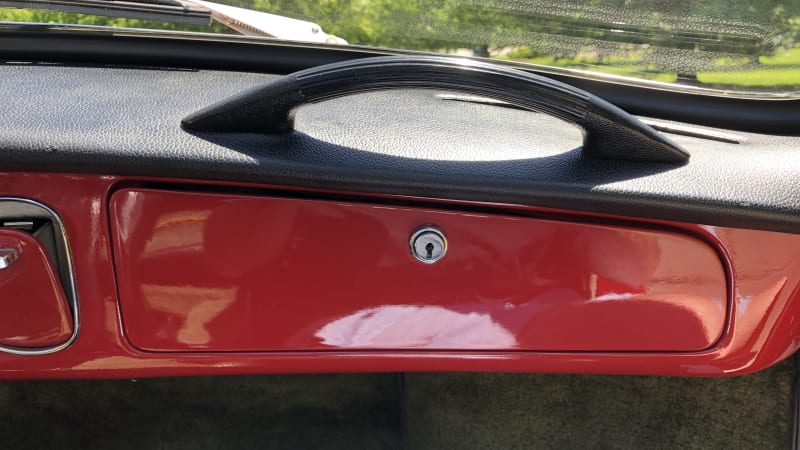 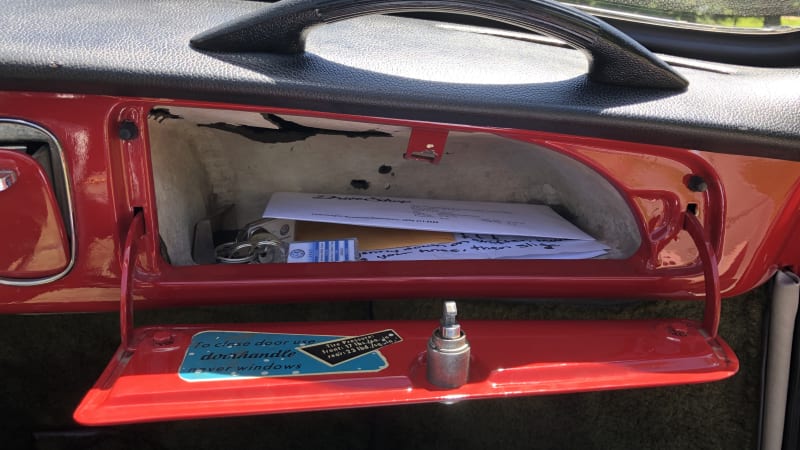 Just don’t overpack when it comes to items you need at the ready in the front seat. The doors have small pockets to slip a cell phone in (such foresight by those engineers from the 1960s), but there are no cupholders. Smokers will delight in the easily accessible ashtray next to the radio. The last pocket of storage is in the glovebox, which is small by any standard. But hey, there’s enough room for a couple pairs of gloves in there. What else could you possibly need?