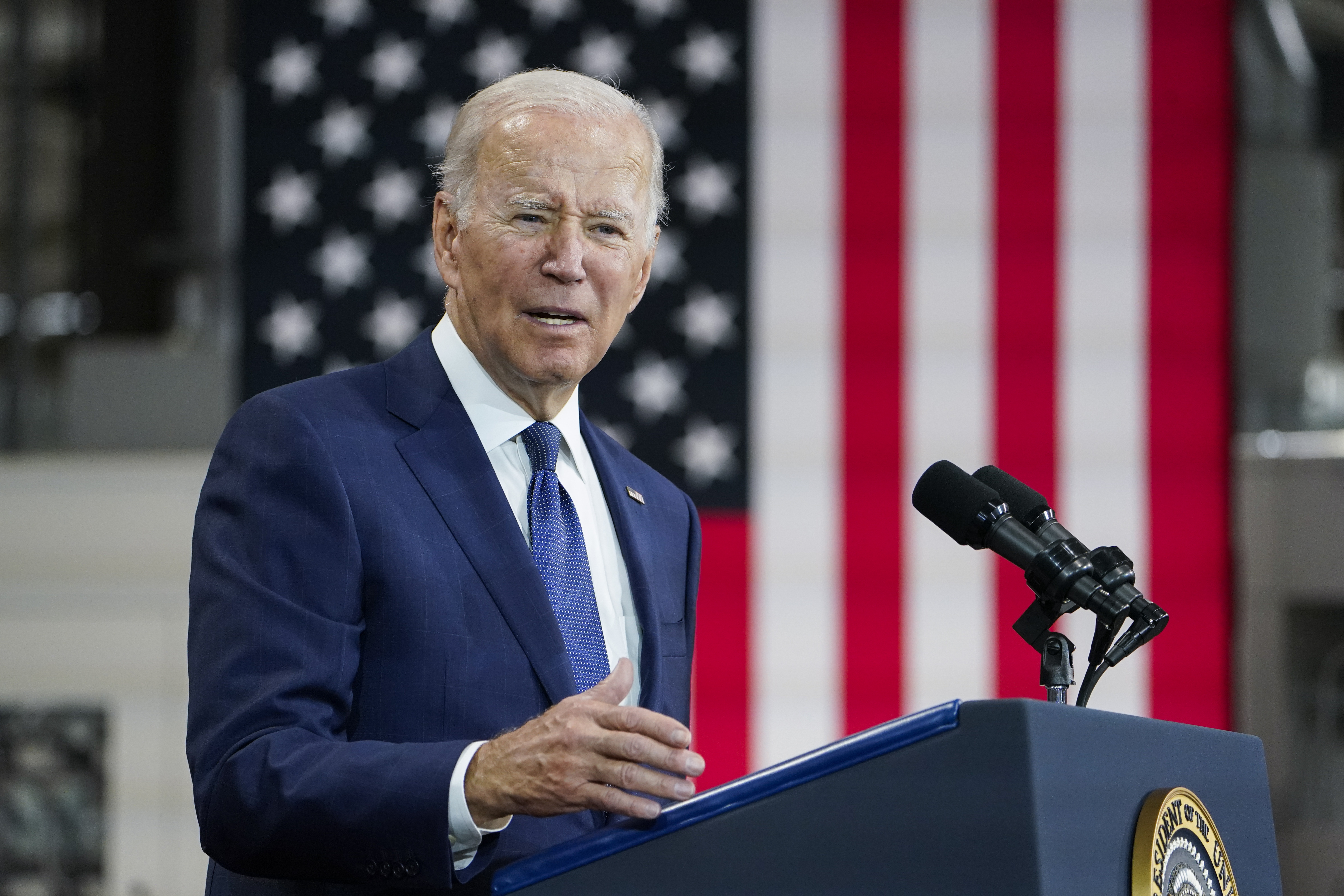 When it comes to reassuring Americans about an economy that’s an election-year challenge for his party, President Joe Biden is telling the country to hold on.

It’s a message of patience as voters are buffeted by persistent inflation, fears of a recession and the prospect of rising energy prices in the closing weeks of the campaign season when they will determine the fate of vulnerable Democrats and control of Congress.

The $25 trillion-plus economy is veering in two radically different directions.

Growth has fallen for two straight quarters, raising the specter of recession. But job gains have rolled on, including 263,000 more in September as a sign of economic health. Nonetheless, the latest jobs report sent stocks plummeting Friday on renewed worries that the Federal Reserve will have to continue aggressive interest rate increases to temper rising consumer prices.

Biden argued that the newest numbers are solid and have slowed in recent months in a way that points toward inflation easing. Major oil-producing countries led by Saudi Arabia and Russia dealt him a “disappointment” with their decision last week to cut production, but the U.S. government forecasts that domestic output should increase by an average of roughly 840,000 barrels a day next year.

Speaking at a Volvo drivetrain factory in Hagerstown, Maryland, Biden tried to make the case once more that lots more factory jobs were on the horizon.

“This is the progress we need to see,” the president said. “In the short term, the transition to a more stable growth that continues to deliver for workers and families while bringing inflation down. In the long term, the economy built on a firmer foundation. We still have a lot of work to do. We’re building a different economy than before, a better one, a stronger one.”

Yet polls show Biden consistently with poor marks for his handling of the economy, and people in the United States broadly view the country as headed in the wrong direction.

A September poll from The Associated Press-NORC Center for Public Affairs Research found just 38% of those surveyed approve of Biden’s economic leadership. Twenty-nine percent of U.S. adults said the economy is in good shape, while 71% say it’s doing poorly. That was better than in June, when 20% said conditions were good and 79% said they were bad.

While Biden is not on the ballot Nov. 8, Democratic candidates are facing relentless criticism from Republicans who want to make the election a referendum on the president’s performance. With GOP ads citing inflation and high gas prices, there is growing pressure for the White House to address the public’s concerns about the economy before Election Day.

Jason Furman, who led the White House Council of Economic Advisers under President Barack Obama, said the jobs numbers were a political win for Biden, but also a warning of the economic hardship to come as the Fed faces pressure to raise rates to tackle inflation.

“The price level is still high and headline inflation is likely to have picked up every month from July through October due to the dynamics of gas prices,” Furman said. Curtailing that, he said, “unfortunately will take a lot of time, and potentially a lot of pain, for them to succeed.”

For 99 straight days, the White House highlighted declining prices after their peak in June. But they started ticking up last month, and they have shot up more since OPEC and its partners announced severe production cuts Wednesday.

At the end of March, Biden ordered the release 1 million barrels of oil a day for six months from the U.S. strategic reserve to help lower prices. The White House now says the administration is weighing further releases to offset the OPEC cuts. It has also tried to shame oil companies into increasing production and cutting their profit margins.

Meanwhile, the Fed expects that bringing inflation closer to the central bank’s target of no more than 2% a year — it was 8.3% higher in September than a year earlier — will require a contraction in the labor market that could put at least a million people out of work.

Fed officials indicated last month that the unemployment rate would climb next year to 4.4% — up nearly a full percentage point — if inflation were to fall below 3%. The hiring Biden that cheered on Friday might soon give way to losses.

OPEC’s production cut could mean that it will be even harder to lower inflation, with more expensive gas requiring the Fed to take more drastic measures to bring down prices, costing even more jobs.

Investment bank Goldman Sachs on Thursday suggested that oil prices will reach $110 a barrel toward the end of this year, compared with its prior forecast of $100 a barrel. That would translate into higher prices at the pump and has given Republicans more evidence to say he’s put the economy at risk.

“The president is in denial that America is experiencing a dangerous wage-price spiral that will drive high inflation for years, that we are in stagflation, and that we are either in, or on the verge of, a harsh recession — all that he created by bungling the recovery,” said Texas Rep. Kevin Brady, the top Republican on the tax-writing House Ways and Means Committee.