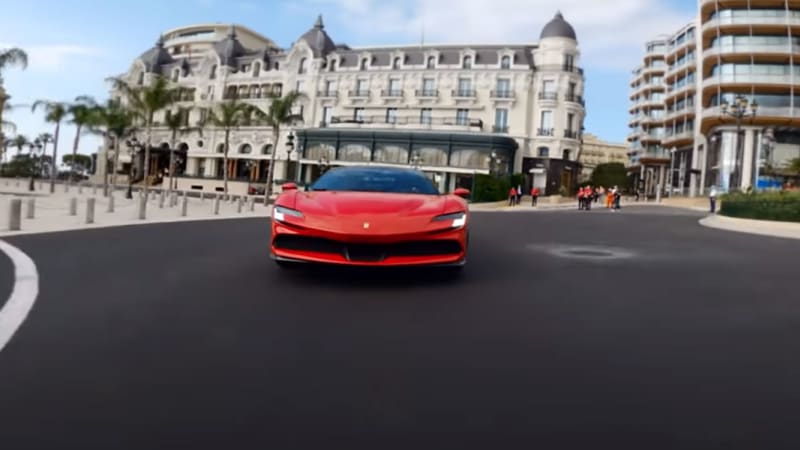 In 1976, Claude Lélouch strapped a 35-mm film camera to the front of his Mercedes-Benz 450 SEL 6.9 and jockeyed through pre-dawn Paris streets, kissing 145 miles per hour at some points, to deliver a real kiss to a lass across town while simultaneously creating a film that would be called, “C’etait un Rendezvous.” For the final cut, Lelouch dubbed in a V12 soundtrack from his personal Ferrari 275 GTB, forever associating the contraband cinema verité with Italy’s scarlet cars. When Formula 1 canceled this year’s Monaco Grand Prix over the coronavirus, Lélouch and Ferrari entered the breach to create a new film called “Le Grand Rendez-Vous.“

This time there’d be a real Ferrari, the SF90 Stradale, hooking around the closed roads of Monaco. Instead of the rumor of a F1 driver — Jacques Lafitte was said to be the pilot in 1976 — Ferrari F1 star Charles Leclerc was on wheel duty. As sequels do, always going bigger than the original, the one-man crew, sole car, and single 35-mm camera was replaced by 17 film techs and assistants, two SF90 Stradales, six Ferrari engineers and mechanics, six iPhone 11 Pros, nine Go Pros, and a full-frame, 6K Sony Venice digital camera.

And also as sequels do, the result is nothing like the original — it feels like a promo piece for Ferrari and Monaco that would air during the 90-minute F1 pre-show broadcast. “Le Grand Rendez-Vous” lasts nearly six minutes, a couple minutes less than the original, takes us on a couple runs around the circuit, includes a cameo from Sovereign Prince of Monaco Albert II plus a band of extras from the Hotel de Paris, and introduces us to Rebecca the Florist. Enjoy.