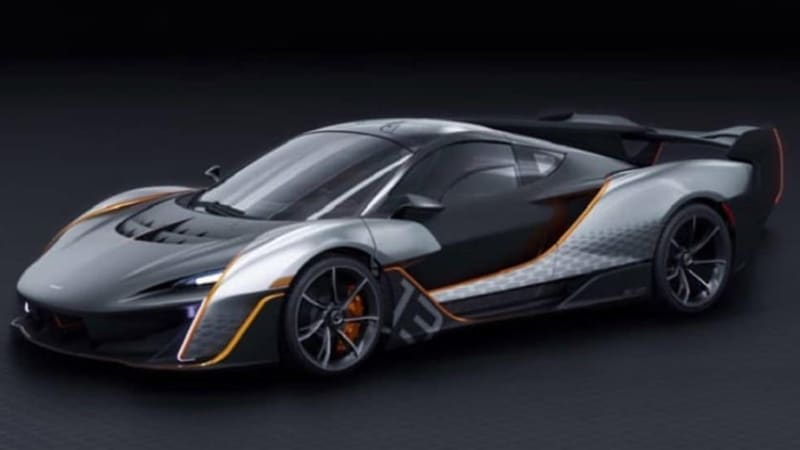 In October 2018, The Supercar Blog dished on how exotic car collector and Instagram user dan_am_i had arranged with McLaren’s MSO division to procure a special supercar. The working name of the new coupe was “Bespoke Commission BC-03,” and it was rumored to be a road-going take on McLaren’s Ultimate Vision Gran Turismo concept from October 2017. The Woking automaker’s Vision GT was a track-only single-seater with 1,134 horsepower and 940 pound-feet of torque erupting from a 4.0-liter twin-turbo V8 powering the rear wheels and two high-output electric motors powering the fronts. Last October, someone put renders of the BC-03 on Instagram (pictured), the car’s lines spread over a design spectrum stretching from the Senna to the Vision GT.

Grand Tour Nation recently came across a trademark application McLaren submitted to the U.S. Patent and Trademark Office to reserve the name “McLaren Sabre.” A saber, as our brand of English spells it, is defined in its noun form as “a heavy cavalry sword with a curved blade and a single cutting edge,” in its verb form as to “cut down or wound with a saber.” Based on a few bits of circumstantial evidence that we found at the McLaren Life forum, we believe the name will be applied to the production version of the BC-03.

Compare the BC-03 renders to this Instagram post of a camouflaged, fire-spewing McLaren caught testing after dark last September on what appears to be a track. It features the same shark fin and wing, same exhaust placement, same diffuser, very similar graphic over the engine bay.

In January of this year, Instagram user cococulture_ had business at the McLaren customer design studio. While there, they logged video of a scale version of the BC-03 under a cover. The caption is the gotcha:

After checking our notes, we feel confident affirming that “Sabre” starts with an “S.” Of course, nothing is certain until McLaren puts the coupe on the display stand, but the evidence lines up so far for the BC-03 to become the Sabre.

The original coverage from two years ago claimed there’d be five examples made, with three of them spoken for. New numbers from McLaren Life posters say there will be 15 units built, all for the U.S. market, all reserved for McLaren Automotive’s best VIP customers. It’s also said that there won’t be a hybrid powertrain, which, assuming the Sabre is based on the Senna, makes sense. There are predictions of “new cutting-edge technologies, and a special type of carbon fiber,” though, and a price around $3 million. Supposedly, a few slots remain for purchase, and hypercar purveyor Knight International recently offered a slot for sale.

Having trademarked the name, the product can’t be too far away, but McLaren’s not consistent with its timeline between trademark applications and reveals. There was about a week between the U.S. PTO application for the MP4-12C Spider and that car’s debut, five months in the case of the P1, and for the 650S and GT, McLaren applied to the U.S. PTO after each car debuted. We’d say there’s a good chance we’ll get a glimpse of the final cut — either from McLaren or one of the owners — before the year is out.