Porsche teamed up with computer animation studio Pixar to bring one of the cars from “Cars” to life for a good cause. It unveiled a one-off 911 GTS named Sally that was designed as a tribute to the 2002 911 that starred in the movie, and it will give enthusiasts the chance to bid on it.

We’ll start by answering the question that likely popped up in your mind after you read the headline: No, the 911 Sally does not have eyes. Here’s why: “We decided early on that we wanted to make a drivable 911, inspired by but not a direct copy of Sally Carrera. After all, she loved to drive — and this helped guide us. If Sally Carrera was built today in life-size, for the road, what would she look like?” said Jay Ward, Pixar’s creative director of franchise. Bob Pauley, the man who drew Sally 20 years ago, participated in the project as well.

The collaboration started in November 2021. While the car that starred in the movie was based on the 996-generation 911 built from 1997 to 2006, the 911 Sally started life as a current-, 992-generation car. It’s finished in a light shade of blue aptly named Sally Blue Metallic that was created specifically for it, and it rides on 20-inch front and 21-inch rear wheels inspired by the ones fitted to Sally Carrera in “Cars.”

Boris Apenbrink, the director of Porsche Exclusive Manufaktur Vehicles, told Autoblog that the directional, heritage-laced wheels were also designed exclusively for the 911 Sally and that they will not be offered on the regular-production 911 GTS. “As it stands, today, there is no plan to offer this design on future models. These is a truly one-off design created for this car,” he stressed. He added that this decision was taken to underline the 911 Sally’s uniqueness. “We have to keep it special. You don’t want someone making Sally’s twin sister as soon as you sell it by ordering it directly from the configurator. It was very important for the auction to create an honest-to-goodness one-off.” 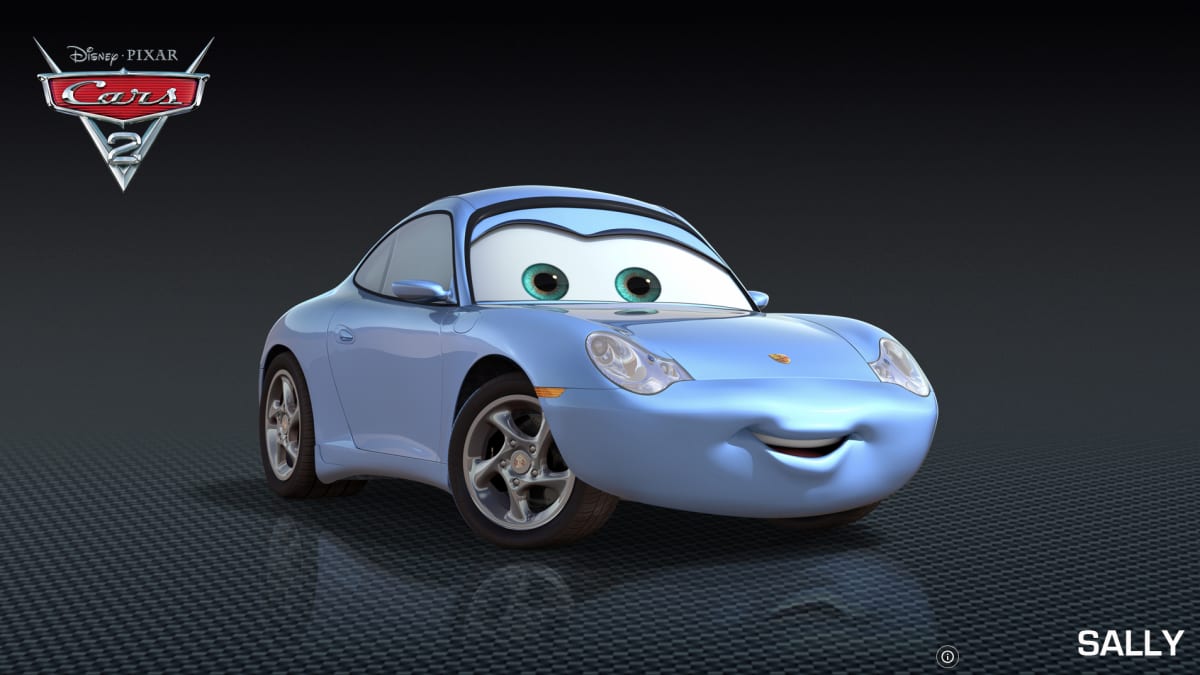 Even small details were incorporated into the build: Sally’s “tattoo” was reproduced as a decal on the 911 Sally’s rear end.

Inside, designers had the luxury of starting with a blank slate because Sally Carrera had no interior so nearly every part was modified to some extent. The cabin features Pepita cloth upholstery with blue accents, Chalk leather, plus Chalk and Speed Blue stitching. The shift knob’s gear pattern is finished in Speed Blue, while the Sport Response button on the steering wheel is labeled “Kachow Mode.”

There are no mechanical modifications to report, meaning power comes from a 3.0-liter, twin-turbocharged flat-six engine that develops 473 horsepower and 420 pound-feet of torque. It spins the rear wheels via a seven-speed manual transmission.

Porsche stresses that the 911 Sally will remain a one-off; it’s not a preview of a limited-edition model, and it doesn’t hint at a new 911 variant. If you want it, it’s not too late: RM Sotheby’s will auction the car on Saturday August 20, 2022, as part of its Monterey Car Week sale. Bidding is open to all United States residents, and the proceeds from the sale will be split between charities Girls Inc. and USA for UNHCR.

There’s no word on how much the 911 Sally will sell for. Porsche charges $144,050 for a standard 911 GTS (including destination) but we wouldn’t be surprised if bidding ends at 10 times that number. One- and few-off 911 models are normally very sought-after by collectors, and donating the proceeds to charities will undoubtedly convince bidders to dig deeper into their pockets than they normally would. And, as a bonus, the winning bidder will receive a second set of wheels for track use, a one-off watch created jointly by Porsche Design and Pixar, an indoor car cover, the original molds used to finalize the color, the car’s show plates, and a book that documents the development process.

What about the “real” Sally?

Sally Carrera is one of the few cars from “Cars” that has been brought to life. Built by Pixar in 2005 for marketing purposes, the 1998 911-based replica features a chopped wheelbase, a raised roof, and body panels modified to achieve the cartoonesque proportions. It has eyes and a mouth, yet it’s fully functional and powered by a 300-horsepower flat-six. It’s sometimes displayed in the official Porsche museum.