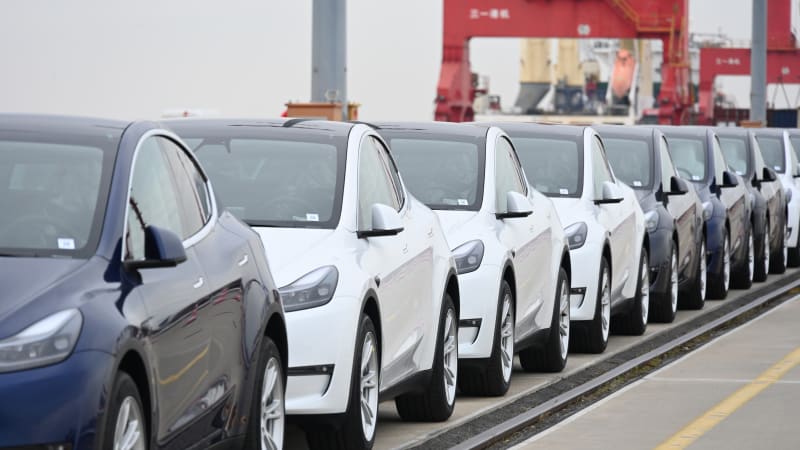 China-built Teslas queued up for export at the port in Shanghai. (Getty Images)

Tesla is ramping up production at its factories in Texas and Shanghai to head off an upcoming ambush of new EVs from legacy automakers.

On Monday, the world’s largest EV maker completed a long-delayed project to expand capacity at Gigafactory Shanghai, where it builds Model Y SUVs and Model 3 sedans for customers in Asia and Europe. On Saturday, the automaker announced in a tweet that its Gigafactory in Texas built its 10,000th Model Y since opening in April, an important milestone as it hikes up production of the compact electric crossover there.

Tesla, which has long dominated the segment, has been ceding market share to newcomers and legacy car companies alike. EVs took center stage at the Detroit Auto Show‘s media preview last week, with several brands jockeying for the top position. Ford began delivering its F-150 Lightning pickup truck to customers in June, while Hyundai, Jeep and others plan to launch several new EV models over the next couple of years.

Tesla models comprise four of the five top-selling EVs in the U.S. and roughly two-thirds of new EV registrations, according to data from Experian. But the army of brands hoping to gain ground against Tesla could threaten the company’s dominance if it doesn’t boost capacity worldwide.

In Shanghai, the company will test the new production lines through November. The $170 million investment is intended to help Tesla ramp up to produce around 2,200 units of Model 3 and Model Y cars per week. Operations there have been stymied by several government-mandated lockdowns during a COVID resurgence in the spring.

Production at its Gigafactory in Austin, Texas, has been constrained by the availability of the more-efficient 4680 cells that comprise its new battery architecture. Panasonic plans to resolve the bottleneck in early 2024 when it starts producing the advanced cells at the $4 billion battery factory it’s building in Kansas.

Once it achieves volume production in Texas, Tesla can focus on its long-anticipated Cybertruck, which CEO Elon Musk said will begin production next summer.